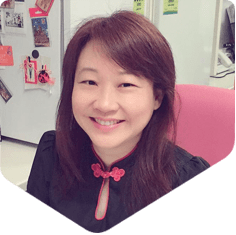 When she was undergoing surgery training, she was taught locally by the pioneer surgeons in breast conservation prior to the coining of the term “Oncoplastic”, which led to her subspecialty interest in breast cancer surgery. She was fortunate to have been among the earliest batches of surgeons in Singapore trained by the pioneers in laparoscopic surgery as well as cross-trained in endoscopy. She is a life member of both ELSA (Endoscopic and Laparoscopic Surgeons of Asia) and the Hepatopancreaticobiliary Society of Singapore (HPBA(S))

She runs her own solo private practice at Gleneagles Medical Centre, Singapore. She is multilingual. In addition to English, Mandarin and Hokkien, she is fluent in French and can speak Malay for medical purposes. She speaks a few other languages and dialects at varying levels of proficiency. She is a certified translator/ interpreter for English Mandarin, having attained a Graduate Diploma in Translating and Interpreting from Nanyang Technological University through a combined programme with the Guangdong University of Foreign Studies.

To serve the medical community, she is active in various professional associations and organisations. Since 2007, she has been a Council Member of the Singapore Medical Association (SMA). She is the Vice-Chairman of the Medical Indemnity Committee, Board Member of the Centre for Medical Ethics and Professionalism (SMA-CMEP), and one of the Directors of SMA Pte Ltd. She represented the SMA as the Councillor of the Confederation of Medical Associations in Asia and Oceania (CMAAO) from 2008-2018. She is a member of the Standing Committee on Professional Affairs at the Academy of Medicine Singapore. Dr Woon has been a member of the Transplant Ethics Committee since 2014. She was appointed to the National Medical Ethics Committee (NMEC) for 2017-2018.

Dr Woon was elected an ExCo member of the Medical Advisory Board of Gleneagles Hospital from January 2015 til 2018. She is the Chairperson of Continual Medical Education Committee and organized and chaired the Annual Scientific Meetings of 2014 til 2018.

In 2011, she was elected to the Executive Committee of the College of Surgeons, Singapore at the Academy of Medicine where she held the posts of Treasurer (2011-2012) and Honorary Secretary (2013-2015). Dr Woon was a Council Member of the Medico-Legal Society Singapore from 2014-2015 and Council Member of the Association of Women Doctors (Singapore) from 2014 to 2016 to support and assist female medical students and doctors with various matters, as well as do social work for the community.

In addition to her medical work, Dr Woon is also an Advocate and Solicitor of the Supreme Court of Singapore, called to the Singapore Bar in 2013. She is an Associate of the Medical Protection Society and is an Associate Mediator at the Singapore Mediation Centre and Ministry of Health Holdings where it is her pleasure to assist in settling disputes between parties.

Her main hobby is music. She performed on the oboe with the alumni orchestra of the Singapore Youth Orchestra - the XYO - at the Victoria Concert Hall on 5 July 2015 under the SSO series for SG50 celebrations.

We are also medisave accredited facility and linked to NEHR.